We know what you’re thinking: who cares? is a roach, right? No matter what species it is, it’s not like you’ll want a cockroach in your home! While you’re certainly right about that, there’s still a good reason to be able to tell different roaches apart. If you know which roach you have, you’ll have a better idea how to get rid of them. We want to help, which is why we put together this quick reference for which kind of roach you might have. Next time you see a gross bug creeping around, take a look at it and consult this infographic:

So: once you’ve identified your roach, what’s your next step? First, you can take some steps to prevent that specific roach. Once you know what it is, you’ll know what it wants and probably how it got in. Plug up their access point and deprive them of their needs, and you’ll go a long way toward solving your problem.

You could also always tell the experts at Griffin about which roach pests are plaguing you. Once we know which roach you have, then we’ll know exactly how to go about taking care of it. You’ll have helped us do our job, and we’ll be able to protect you all the more effectively! Don’t let your roach problem trouble you . Instead, just give us a call today. No matter which roach you have, we’ll make sure they’re gone and can’t get in again.

There are five species of cockroach in Michigan. Four of those species frequently infest Michigan homes and businesses. Despite their obvious similarities, there are distinct differences between each species of common Michigan roach. They look different, behave differently, and even eat different things. Most importantly, they come into your home in different ways.

Fighting roach infestations effectively means getting to know your enemy. Next time you have a roach problem, try to figure out which roach is troubling you, specifically. Once you know what you’re up against, you’ll know what your next move should be. Here are the four roaches you may have to deal with in Michigan, and what to do about them. German cockroaches are the smallest, most common, and most important cockroaches in Michigan. They only measure around ½ an inch long, though long antennae may make them look larger. German cockroaches are tan or brown, except for two darker stripes running down their pronotal shields (backs). German roaches are considered the worst roach pest in Michigan for several reasons. They’re even more apt to attempting to get indoors than other roaches, and they also spread various diseases. American cockroaches are also frequently encountered throughout Michigan. They’re most common around food storage, making them a constant pest for restaurants, grocery stores, and other food-prepping businesses. American roaches often end up in homes after people inadvertently transport them inside on food boxes. Depriving these roaches of food sources is the best way to get them out of your home. Keep your pantry clean and crumb free, wipe up after meals, and keep food in airtight plastic containers. 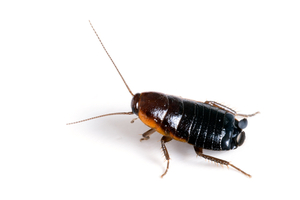 Oriental cockroaches are often called “water bugs” because they love dark, damp, and cool areas near water sources. These roaches measure about an inch long, and look slightly rounder than American or German roaches. They may look somewhat “pill-shaped.” They’re much darker than other common roaches, and appear very dark brown or nearly black. They may also look somewhat greasy or shiny. Both male and female Oriental roaches have wings, but they can’t use them.

Oriental cockroaches are a significant hygiene concern. They feed on all kinds of decaying organic matter, garbage, decomposing plant and animal matter, and waster. Their diets and affinity for humidity means they usually live in filthy areas. They’re frequently encountered in cesspits, sewers, trash dumps, or cisterns. Inside, they congregate toward humid areas such as basements and bathrooms, and they track their germs in with them. The best way to control for Oriental roaches is to control the humidity in your home carefully. At ½ an inch long, Brown-banded cockroaches are nearly as small as German cockroaches, but they look quite different. Living up to their name, Brown-banded roaches have distinctive light brown bands across their backs. They’re also lighter brown or tan than the other roaches listed here, including the German roach. Brown-banded cockroaches have small, fully-functional wings and fly more frequently than most species. In addition to flying, these roaches are also generally more active than the others listed here.

Brown-banded cockroaches also differ from the other species listed here in their preferred habitat. Where most roaches prefer humid locations, brown-banded roaches want to stay dry. They tend to like living in cabinets, pantries, closets, and furniture where they can stay hidden, warm, and dry. Their ability to fly means you may find them higher up than most roaches. Controlling brown-banded roaches means keeping tight control over their food sources. Keep dry goods in airtight containers and clean regularly.

Each of these roaches are different, but they’re all bad news. You don’t want any roach infestations in your home. By figuring out which roaches you have, you can take the right steps to drive them out for good.

If you ever need some help in identifying or controlling your roaches, let Griffin know any time. We’re more than ready to wipe out your roach infestation, no matter which variety you have.