Home
Earwigs
10 Things You Should Know About Earwigs

There are all kinds of frightening common pests, but earwigs might be the scariest of them all. Earwigs frightening appearance, ominous name, and general mysteriousness only contribute further to their fearsome reputation. You’ve probably heard all kinds of creepy things about earwigs, even if you don’t know much about them.

As we’ve said before, we think that lack of knowledge is the biggest reason why earwigs are so feared. When you don’t know much about earwigs, it’s easy to make up all kinds of scary stories about them. We get it–just look at those pincers! To counteract that impulse, here are 10 facts you should know about earwigs. Keep these in mind next time you see an earwig, and they won’t freak you out nearly as much.

Earwigs are not aggressive, and rarely lash out except in self-defense or fear. Even if they do pinch you, they can’t seriously hurt you. The most damage an earwig’s pincer could do is to pinch your skin, which may create a small welt. Earwigs aren’t poisonous, don’t transmit diseases, and can’t inflict significant structural damage. They might be a nuisance, but they’re not dangerous.

9. They don’t crawl in your ears

This is a common myth about earwigs. Despite their name, earwigs do not crawl into and infest people’s ears. They certainly don’t crawl through the ear and lay eggs in the brain, as some of the particularly tall tales suggest. Earwigs like dark, warm, humid places, so it’s technically possible that they may be attracted to a sleeping person’s ear. This would be an extremely unlikely occurrence, however, and the bug wouldn’t stay there long, lay eggs, or burrow. You shouldn’t worry about earwigs burrowing into your ears.

8. They will pinch defensively

Earwigs are not dangerous, but they will use their pincers on humans if they feel threatened or startled. Usually, earwigs will pinch you if you try to pick them up or handle them. These pincers probably aren’t strong enough to break your skin, but the pinching might hurt a little. It could also leave a small bruise or welt. Don’t pick up the earwigs you find with your bare hands. 7. They love hiding in dirt

The most common place you’ll find earwigs is under thin layers of topsoil in your garden or yard. Earwigs love to burrow through soil to stay hidden, damp, and cool. They’ll also eat subterranean plant life and dig out small nests for their eggs. You may frequently encounter earwigs while digging in your garden.

Earwigs aren’t native to the US but have been firmly established since at least 1907. The most common earwig in North America, the European Earwig, thrives throughout the US. They might not be native, but it’s normal to find earwigs around your home. Don’t be alarmed if you see one in your garden.

Earwigs are omnivorous foragers, which basically means they’re not picky. Though they prefer rotting plants, they’ll eat pretty much anything they can. Earwigs often hunt and feed on smaller insect pests. They use their forceps to catch and hold their prey before eating them. Earwigs will eat whatever they can find in and around your home. 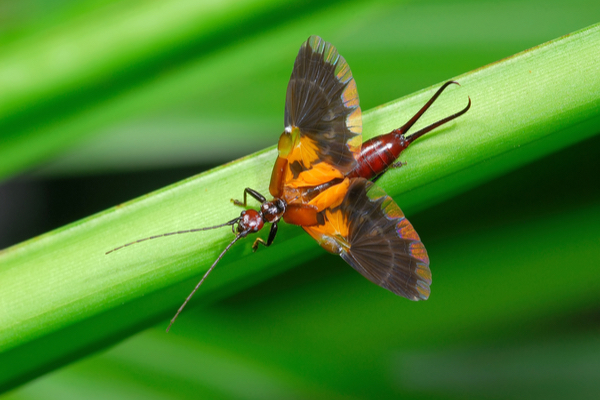 3. They have wings and may use them to limited effect

Earwigs aren’t good fliers, but they do have usable wings. The European earwig may use these wings to jump small distances, break falls, or escape danger. Unfolded earwig wings are shaped like human ears, which is where some people think the name actually comes from.

2. They often get inside homes via hitchhiking

Earwigs are attracted to darkness, humidity, moisture, and shelter. When they find ideal locations, they love to dig in (sometimes literally). These factors make them highly-mobile accidental hitchhikers. Like bed bugs, they often make their way into different bags or boxes. Then, when you bring those bags or boxes inside, you’re also inadvertently bringing in earwigs. Earwigs are especially likely to infest bags of dirt, fertilizer, or seeds.

1. They love moisture and humidity

Earwigs want to live in humid, moist, and cool environments. They’re attracted to topsoil because it lets them stay cool and sheltered in a dark and humid place. If your home provides an environment they like, they’ll be attracted to it. It’s not uncommon to find earwig infestations in low, humid areas of your home such as your basement. You may have transported them inside, or they may sneak in through gaps near baseboard or window wells.

Hopefully, these ten facts demonstrate that earwigs are far from the fearsome monsters you might see them as. In fact, as far as pest insects go, they’re relatively harmless and mundane.

Just because earwigs are harmless doesn’t mean you should have to tolerate them, however. If you have an earwig problem in your home, give Griffin a call anytime. We can kick out earwigs just like they’re any other pest–because they are.

10 Things You Should Know About Earwigs Serving Kalamazoo & Grand Rapids

Home » 10 Things You Should Know About Earwigs The Pests That Sneak Into Your Kitchen

Bed Bugs in Your Car