How Do Wasp and Bee Stings Work? | Griffin Pest Solutions Skip to content

How Do Bee Stings Work?

Whatever the reason, bee stings are always interesting to learn about. You even have a practical excuse: the more you know about bee stings, the more reliably you can avoid them! Here’s everything you ever wanted to know about how bee stings work and why they happen:

Why do bees sting?

As you’ve probably heard, bees don’t go out of their way to sting people. Bees will only sting you if you surprise them or they perceive you as a threat. Usually, the reason bees sting people is that people wandered too close to their hives. Bees are very defensive of their hives and quite willingly sting to defend them. If you’re not near a hive, then bees will only sting you as a last resort if they feel you’re threatening them.

Bees feel threatened when you make fast, aggressive movements toward them. Swatting or clapping your hands at bees may startle them enough to react by stinging you. Unfortunately, it’s also possible to accidentally incite a bee to sting you by startling them. Many bee stings happen when someone accidentally steps or even sits on a bee. You could also accidentally startle one by disturbing the flower it was drinking nectar from. 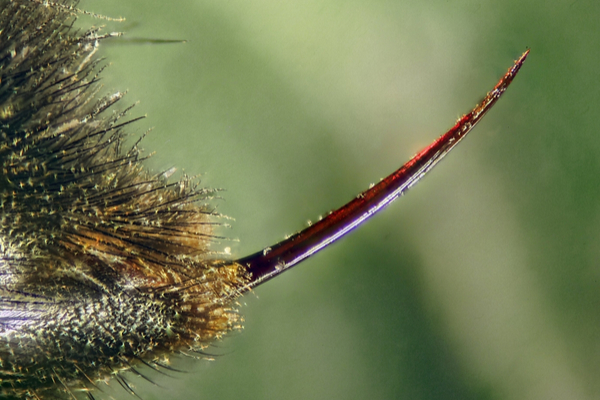 How does a bee stinger work?

A bee’s stinger is a modified version of an ovipositor, or egg depositor. The stinger itself consists of three main components: one stylet (the penetrating “needle”) and two lancets (small barbed tips). Each of these components is hollow. They connect to another hollow chamber called a “bulb” at the top of the stinger. The bee’s venom is stored in a venom sac above the bulb. The venom sac deposits venom into the bulb via two valves.

When the bee stings, they insert the stylet into skin like a needle. As the bee inserts the stylet, the barbs of the two lancets catch on the flesh at different points. This creates a small gap between the tips of the lancets, exposing the hollow space inside the stylet. Meanwhile, venom flows from the bulb and down through the canal-like hollow structure of the stylet. When the gap opens, venom in the stylet flows out into the wound created by the stinger. Honey bee stingers are also barbed at the end, which prevents easy removal.

How does bee venom work?

Bee venom is called “apitoxin.” Apitoxin is a complex mixture of protein substances that affect cellular function. These peptides and enzymes break apart fat layers in cells and destroy skin mast cells. When skin mast cells die they release histamine, which dilates the blood vessels. People who are allergic to bee stings release too much histamine when their mast cells die. Their blood vessels dilate too significantly, triggering potentially deadly anaphylactic shock.

The main active component of apitoxin is the peptide Melittin. Melittin consists of 26 amino acids and constitutes 40-60% of the dry weight of apitoxin. This peptide both destroys red blood cells and activates pain receptor cells in both direct and indirect ways. It’s primarily responsible for the pain that accompanies a bee sting. Apitoxin also contains anti-coagulation factors like another peptide called phospholipase A2. Anticoagulants prevent local blood clots near the sting, which helps the venom circulate further in the blood stream.

What do stings do to the bee?

Honey bee stings work a bit differently from most other wasp and bee stings. Common honey bees have a barbed stinger. These barbs make the stinger impossible for the bee to safely remove themselves.

Instead, bees rip out a significant portion of their own abdomens to leave their stingers behind. The massive injuries sustained during this process kill the bee almost immediately. The bee’s stinger, meanwhile, remains lodged in the victim’s skin along with the body parts the bee ripped away.

How can I avoid bee stings?

First and foremost, you should avoid getting too close to honey bee hives. Bees are usually cautious about when they sting (wouldn’t you be?), but they’ll defend their homes without hesitation. You should always treat bee hives with appropriate caution. Stay at least 10 feet away from bee hives whenever possible. If you have to approach a bee hive, do so very cautiously. If you have a bee nest near or on your home, we recommend having it removed immediately.

Bees might also sting you if you inadvertently startle them. The best way to avoid doing that is by taking steps to make sure you aren’t accidentally attracting bees. Bees are attracted to anything that looks or smells like a flower. Wearing pungent perfume or bright colors make you attractive to honey bees looking for nectar. Sweet foods and drinks may also attract honey bees. If you see a bee near you, try not to make sudden movements. Remain calm and let the bee fly away on its own.

Bee stings are scary, but they’re also easy to avoid. As long as you follow these tips and pay attention, you shouldn’t have to worry about bee stings.

If you’re worried about the bees around your home, give Griffin a call any time. We’re always happy to help keep you safe and put your mind at ease.

Home » How Do Bee Stings Work? The Indian Meal Moth in Michigan

The Pests in Your Basement this Fall What NOT to Do Around Bees