What Is An Earwig and What Does It Want? | Griffin Pest Solutions Skip to content

Home
Earwigs
What is an Earwig?

Earwig’s pinchers, along with their ominous name, have given them quite a reputation. As a consequence, the bugs tend to be much-feared and little-understood. We want to change that. Not for them really, so much as for you and your heart rate. Here’s everything you need to know about the earwigs in your garden, including why they aren’t dangerous.

So: What is an Earwig?

Earwigs are insects of the order Dermaptera. The most common species in Michigan is the European earwig (Forficula auricularia). Adult European earwigs are ⅝” long, with elongated, flattened bodies that are reddish-brown. They have segmented abdomens, medium-length, segmented antennae, and chewing mouthparts. Their antennae, legs, head, pincers may look lighter than the rest of their bodies.

Earwig’s “pinchers” are called cerci. Male’s cerci curve and resemble forceps, while female cerci are straight. Adults also have fully-functional wings, which emerge from beneath short, hard wing covers on their backs. Adults can fly for short distances competently but rarely do.

Where Do Earwigs Come From?

European earwigs were first discovered in the US in Seattle (of all places!) in 1907. Since then, they’ve spread throughout most of the US. Earwigs have been established in Michigan since the 1930s. They’re attracted to wet, shady environments, so it makes sense they’d like Michigan.

Earwigs are nocturnal and spend days nestled in dark, moist environments. They’ll huddle under wet leaves, topsoil, rocks, logs, or other cracks or crevices. At night they’ll come out of these hiding places for forage and/or hunt for food nearby. They’re common in gardens, wooded areas, and compost piles.

What Do Earwigs Want?

European earwigs feed on wet, decaying vegetation, like compost and other decaying plant life. They’re attracted to food that’s near their living environment. Many target the root systems of garden plants, weeds, and flowers, feeding on these plants from under topsoil.

In winter and summer, it might get too cold or hot for the insects to survive. When that happens, they’ll seek out shelter. Ideal shelter keeps the bugs out of freezing temperatures but isn’t so hot that they dry out quickly. In other words, they’re looking for a warm, humid, dark, and hidden place. Which brings us to…

How Do Earwigs Get Inside Homes?

When earwigs enter buildings, it’s usually by accident. Most enter buildings either in the middle of summer or early fall. Generally, they’re looking for shelter and they accidentally slip through a crack into a building. If earwigs enter your home, then they were probably already living nearby.

Earwigs often burrow under topsoil near your home or garden. They may find cracks and crevices in the foundation or baseboard to work their way into under the soil. Like many pests, they can also squeeze through gaps around window frames. Earwigs frequently find cracks around basement window wells, in particular.

No. Contrary to popular belief, earwigs do not burrow into people’s ears to lay eggs. The name actually refers to their wings, which are shaped like ears when unfolded. Earwigs are completely harmless. Even if they pinch you, they won’t be able to break the skin.

Outside, earwigs can inflict damage on garden plants. They’re known to feed on the bulbs, stems, and petals of flowers. In some extreme cases, they can actually substantially damage plants by feeding on them. They may also produce a foul-smelling odor when they’re crushed. The pests may be a nuisance, but they’re not dangerous.

How Do I Keep Earwigs Away?

Re-seal and weatherproof your basement’s window well frames. Look for cracks or gaps around your basement ceiling and seal them up. Check the baseboard and trim, too. Earwigs travel into homes by finding and wiggling through small cracks. You may also be able to find these openings outside.

It’s more difficult to keep the bugs away outside, but there are still a few steps you can take. Take good care of your garden and lawn. Clear up weeds frequently, trim regularly, and remove plants as soon as they die. Be careful not to overwater your plants.

Earwigs aren’t dangerous and don’t inflict major damage on homes. Hopefully, this will make them a bit less scary next time you find one. But… we’d understand if it didn’t. They have a big pair of pinchers on their butts!

If you’re…less-than-thrilled to have pests around your home, give Griffin Pest Solutions a call anytime. We’d be more than happy to help rid you of your problem. We can take care of any other pests, while we’re at it.

What is an Earwig? Serving Kalamazoo & Grand Rapids

Home » What is an Earwig? 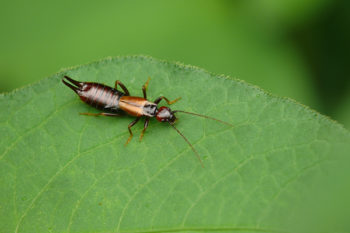